Walking is a piece of cake in real life but the same thing is burdensome in virtual world. Beginners experiencing with VR headset for the first time have to deal with nausea. For this reason different locomotions were introduced to experience different practices in simulated immersive environment. Teleportation is one of the basic mechanisms. Some use methodologies like sprint, dash and blink teleportation for the movement purposes. Now a new mode of locomotion has jumped in VR and it’s intuitive too.

Cybershoes, a technology which follows the same technique as walking in VR world. But here, a person has to sit on a chair and moves his or her feet back and forth. The soles are simply belted around shoes with a snowboarder style leashes. The company wanted to implement the idea with laser setup but due to variation of ground textures available to users, it restricted them to continue with laser tech. To accomplish the task a wheel like a shape of barrel was fixed in the Cybershoes which rotates with back and forth motion of feet. It is very easy to move with such tech-shoes in virtual reality because the motion is natural and allows the wheel to move effortlessly. The idea behind this wheel was to get more productive results with little energy. 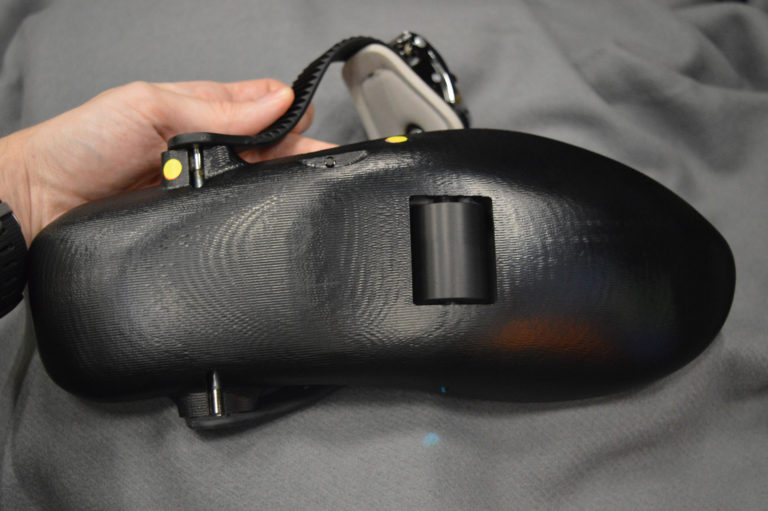 It becomes a little problematic when the user has to take a turn in the VR environments. Some VR games or experiences don’t allow the snap-turning feature. In case of Cybershoes you have to sit on a rotating chair. So the user has to physically direct feet to face posture where he or she wants to go in simulated immersive world. It is very challenging during the quick turns. A method is required to suspend the cable of headset over the head of user so it doesn’t tangle while using the device. The company will be proposing some chair models that will solve this issue when the project will make its way to Kickstarter in September.

Cybershoes, manufactured with the help of conductive plastic, are pretty sturdy as they can hold up to the weight of 100Kg. The shoes store a strong static charge as the user is continuously rubbing the feet for movement. Another extraordinary feature is the elimination of static discharge from the shoes. The straps can easily be plucked that allows it to clutch and open easily. Trying to walk somewhere else should be prohibited to save yourself from face planting.

Micheal Bieglmayer, CEO of Cybershoes, is putting huge efforts to make VR experiences more comfortable by allowing you to walk in virtual reality while making things more immersive. The project of Cybershoes is near to completion of its final prototype. Less than $300 is a reasonable starting price for VR fans. The funds for the project, final price and delivery date of product will be available when company’s Kickstarter will arrive in the last quarter of this year.