Pico Interactive releases Pico Goblin, a solid stand-alone ultra modern futuristic VR headset. It is untethered and ultra-portable giving freedom to play anywhere and anytime. Not run by a phone but has a customized advanced version of android operating system with apps and games readily available to experience. It has a three degrees of freedom (3DOF) controller just like the Gear VR or Google Daydream. It’s dimensions are 102 x 186 x 103mm. It weighs 500g which is a bit heavier than Rift and Vive which weighs 470g and daydream which weighs 370g. 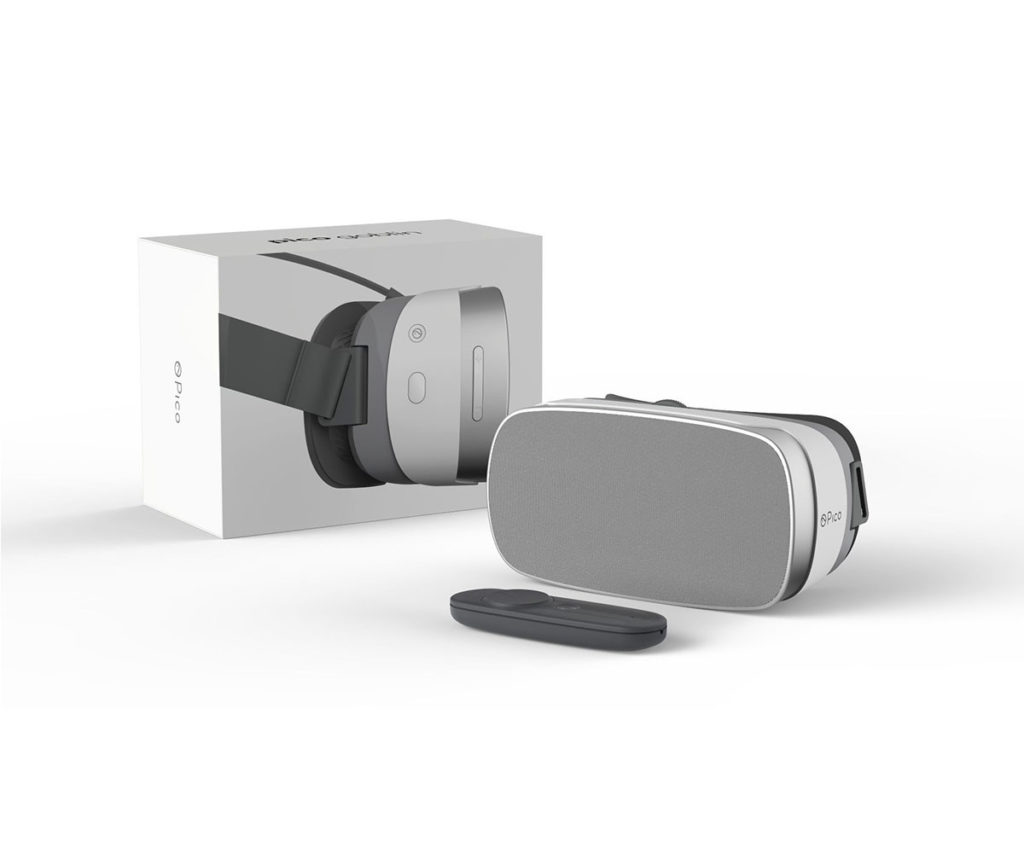 It has bundled handheld motion controller, which is as simple as ABC with just two buttons and a clickable touchpad super light weight as feather. Its sleek design resembles to the Gear VR with cuts and curves smooth as peanut butter. It is available in white and black both with grey attire. The headset has velcro straps which are easily adjustable to your desirable position. The headset device has minimal light leakage. Its thick cushion lining around the rim of the headset has made it comfortable to rest on your head keeping you energized which soaks up any possible sweat. The device has minimal heat emission.

The buttons are not complicated and just rightly precise for your need, total of 4 buttons are on the headset with a focusing dial. There is a menu button with a Pico Interactive logo on it and a button for confirmation. A button for turning the device on or off and a volume increase and decrease button is on the side of the headset. The Pico Goblin has a 3.5mm stereo earphone jack and a mono speaker on the front of the headset device with a microphone. The headset has a support for upto 128 GB micro SD slot to expand on the 16 GB eMMC 5.1 SSD of fast inbuilt memory. It is wifi compatible and bluetooth 4.2 compatible. The headset has a 5.5” super fast TFT LCD, 2560 x 1440 70 Hz refresh rate which is better then the 60Hz seen on many competing smartphones with crystal clear display. Its self-adaptive pupil distance (54-71mm), 92 degree FOV, blue ray reduction is easily adjustable.

The headset has a continuous game play of 3 hours due to a 3500 mAh battery with support of Qualcomm quick charge. The pico goblin has the Qualcomm Snapdragon 820 CPU cutting edge mobile processor with X12 LTE support. The Snapdragon 820 is a quad-core chip, boasting four of the Qualcomm’s in-house Kryo CPU cores. Due to this the device has a lightning-fast LTE and immersive visual graphics and less time charge. The video playback is upto 4K ultraHD. This beauty is available for $269 with free shipping worldwide.

The fun has just begun with instant access to VR games with over 50 games available at launch. Not just that but Big Immersive has launched three visually amazing titles with several hours of gameplay. You can save your loved ones in a virtual galaxy in our game of joining two love birds by fighting enemies together called Love Cubed. Take control of the roads in City Traffic Control. Or you can wonder in a whole new dimension of fantasy, a never-ending story of endless fun, kick ass enemies, upgrades in Agelore’s Fantasy. So do check out these games when you purchase the Pico Goblin.

Using the Pico Goblin is an immersive gaming pleasure and it makes me feel as if i can make dreams reality because life is more than just four walls to me, its a universe coming to being…