When Charles Babbage created his Babbage Engine (Also known as a Difference Engine) back in 1822, no one could have predicted the sheer impact it would have on the world. Think about it, computers? They’re everywhere, in your homes, hospitals, pockets and so on. Not too different from the Babbage Engine, came the Turing machine, which, given the shaping hand of time, eventually paved the way for modern day computers. Naturally, with that, technology in all it’s forms began to evolve.

From keyboards to processors to display panels, everything changed. Science Fiction thought it up, and science brought it to reality, and in the never ending technological race, through The Judas Mandala written by Damien Broderick in 1982, we got Virtual Reality.

Even though the practice of an immersive media experience was in play since the 1960s with Morton Heilig’s Sensorama, which would cover the subject’s face and head from ear to ear, engaging them with five different short films, all with it’s own stimuli such as wide angle sight, sound, smell and even touch. Even though the Sensorama was a mechanical device, it placed some of the founding stones for what a “physical media experience” could become.

Giving that a few decades, from the development of the Aspen Movie Map by MIT in 1978, to the various devices by VPL such as the EyePhone and AudioSphere, to the Sega VR headset, which used intertial sensors to track the user’s head movement but never saw market release.

With player upon player jumping into the VR market, it was Virtuality that became the first mass produced and networked VR entertainment system, utilizing specially designed exoskeleton gloves that gave the world it’s first ever “immersive” VR experience.

Now we all know that over time VR improved (some companies more than others obviously), but in the modern day, Palmer Luckey’s prototype of the Oculus Rift, which given two more years, would be unveiled to the world at the 2012 E3, set new standards of what a VR headset should be. No wonder just two years after it was unveiled, Facebook purchased Oculus for a whopping $3 Billion. The breakthrough research of Valve Corporation in 2013, which freely shared the rights of low-persistence-displays, giving rise to lag and smear free VR content, was adopted by Oculus and used in all future headsets.

Not long after that, HTC, accompanied with Valve Corporation, announced the HTC Vive in 2015. Similarly, Sony announced Project Morpheus, a virtual reality headset program for the PS4. Google announced Cardboard, a D-I-Y stereoscopic viewer which utilized a flexible card board cutout and the user’s own mobile phone. Razer announced it’s open source project OSVR in 2015, and by 2016 more than 200 companies were in the vast growing VR market, including Amazon, Apple, Facebook, Microsoft and Samsung.

So with all these companies racing each other for the peak, where is the VR industry going? Will it suddenly collapse like the markets of 3D TVs and 3D laptops? We already know it’s been in practical use for several fields, from psychological ASMR treatment for depression, anxiety and bipolar patients, to obstacle training for bomb squads and fighter pilots. The industry itself was valued at around $14.1 Billion in 2017 by Statista. This number is expected  to rise since the Compound Annual Growth Rate of both VR and AR industries is predicted to be around 40% – 80%. However, trends also show growth of the AR industry will surpass that of the VR industry. ResearchandMarkets.com has predicted that with the introduction of 5G, advanced robotics utilizing automated gyroscopic systems and A.I., the AR/VR market will generate revenues of $55 Billion by 2021. 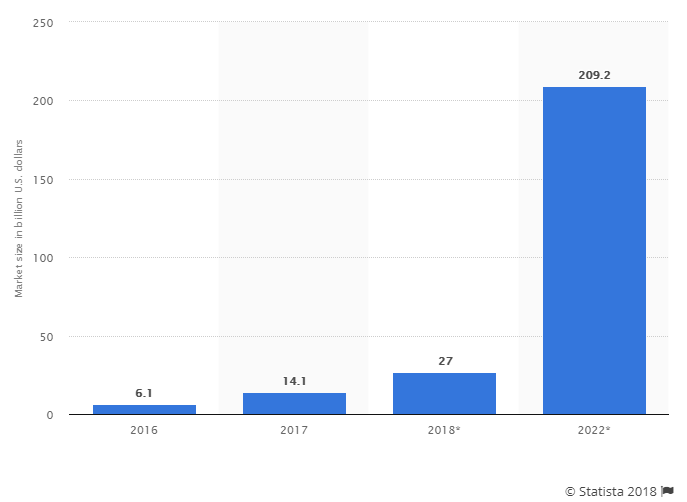 And so, after tumbling over technological obstacles, economic crises and social acceptance, VR and AR are finally making their breakthrough, setting a course for the future.